The only fish that I have mounted (a gift from the outfitter) is a 42 pound striped bass from Lake Cumberland, a Corps impoundment that floods about 50,000 acres of the beautiful hill country of southeastern Kentucky.

While my 42 pounder is a nice mount and a conversation piece for most visitors it is hardly the biggest striped bass to come out of the lake. Nearly each year someone brings a 50+ pounder to the dock. And Cumberland surrendered current Kentucky record striper; a 58 lb. 4 oz. monster in 1985. 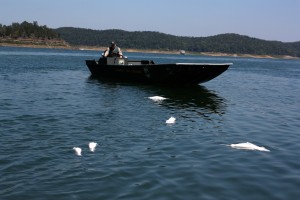 Few striper fishermen doubt that the lake still harbors eye-popping size fish. But visitors of late have been somewhat dishearten. Cumberland’s stripers are dying by the hundreds. Maybe by the thousands. Most of those found floating have been 22 inches or larger.

John Williams is the fisheries biologist whose district includes Lake Cumberland. Last week he reported more than a 1,000 dead striped bass in the lake. Tuesday (9/7) he saw another 200 or so in the tailwater below the lake. Those fish had been pulled from the lake into the tailrace through the turbines.

Neither Williams nor anyone else can do anything about the fish kill, which Williams said is resulting from nearly no dissolved oxygen in the deeper parts of the lake. When the fish come up to the 25-30 foot range for more oxygen (and suffering warmer water temps) their air bladders inflate and the can’t stay down. Death follows.

The problem is accented by the ongoing work on Wolf Creek Dam, Cumberland’s hydroelectric dam which has a long history of leakage problems. The Corps is in the middle of a multi-year, multi million dollar repair job. Consequently, the lake level is about 40 feet below normal – and has been for the past couple of years.

Is worst over for Cumberland’s stripers? Williams – a veteran biologist – worries that it is not.

One concern: Charter captains continue to mark fish in the 80-90 foot range. But fishing action is slow. Very slow.

“That tells me that the fish are still at that depth but they are not feeding,” said Williams. “They may be too stressed too feed. So this may not be over. I’ll feel much better when guides start catching fish at 28-30 feet.”

Sunday night surprise: daughter Rebecca dropped by and prepared dinner for Katy and I. Delicious!