COLUMBIA, S. C. – During Wednesday’s registration for Thursday’s opening of the FLW Forrest Wood Cup bass fishing championship on Lake Murray the atmosphere was mostly relaxed and jovial. Anglers wandered in and out of the hotel conference room where registration tables lined one wall. In a corner of the room a couple of FLW pr guys were doing a podcast and in another corner an ongoing radio interview was being conducted with a revolving door of fishermen/guests. A few fans milled around, clicking photos with their phones. 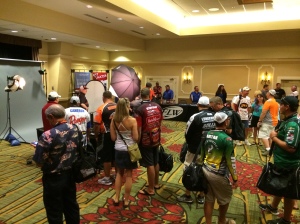 Fishermen were between their final practice day (Tuesday) and the first fishing day (Thursday), fulfilling tournament and business obligations. They all put on a relaxed face during the registration but much is at stake and it showed. For the guys who fail to bring a decent sack of fish at Thursday’s weigh in, the championship will effectively be over. Veteran pro Dan Morehead from Paducah, Ky., knows this. He has qualified for the FLW championship 14 times. He’s come close but has not yet hoisted the Cup trophy. Like all tournament anglers, Morehead guards his planned fishing strategy as though it were a state secret. He did admit to having a “pretty good practice day” Monday. Will this be his year? “We’ll see,” he said. We will, beginning early Thursday.