I’m standing knee-deep in 58-degree water that’s as clear as what runs from your kitchen tap and nearly as clean. Trout surround me. They are within arm’s length. They are within casting distance. They are wallowing. They are splashing. Occasionally there is a rise and slurp, although I can see nothing on the surface on which they might feed. 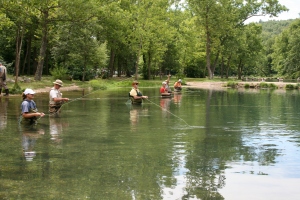 Nearly everything in my fly box has been rejected. I would attribute this to operator error and it probably is, but I’ve seen no one else in sight hook a fish, either. And I have plenty of company.

It’s the last day of a three-day trip to Missouri’s Bennett Spring State Park wwwmostateparks.com/Bennett.htm. For the last round of fishing I am traveling by bike, working my way downstream from the “fly only” section that starts at the 100 million gallon per hour spring to the “bait only” piece of water near where the stream exits the park and where Vic Eckmann (a bait specialist who works at the park store) says he can catch four fish on four cast nearly at will. I’m currently working in the “fly or artificial lure only” section of the stream. No one is catching fish at will.

Trout really are everywhere; mostly rainbows but a few browns. The average length seems to be about 12-14 inches but yesterday while my daughter Rebecca and I were watching fish (and frustrated fishermen) from the quaint stone bridge (a CCC circa 1930s structure) a trout wallowed into view that was 10 pounds if it was an ounce. It was fortunate that the bank side fishermen couldn’t see what we could see.

Within the park more than 2,000 trout are stocked each night during the catch-and-keep season (March through early November) so there is never a shortage of fish. Regardless of the type of tackle you use this is Social Fishing 101. If you come, expect crowds. Sunday it was nearly shoulder-to-shoulder. Today the crowd had thinned enough so there was at least room to cast.

Most of the anglers I’ve seen have been waving fly rods. Jim Rogers, who operates a fly fishing school here www.jimrogersflyschool.com and manages all park concessions, says more than 60 percent of the fishing visitors are fly fishermen; three times as many as only a few years ago.

The horn blows at 8:30 p.m., each day marking the close of fishing hours. Anglers can start fishing again at 6:30 a.m., which I have learned from experience and observation, is the most productive time to be on the water.

Maybe freshly stocked trout really are more gullible then their experienced cousins that have already seen the daily combing by anglers throwing everything from PowerBait to a No. 14 Adams.

A delightful break from the crushing heat.